What It’s Like to Have a HomePod Smart Speaker

With Apple’s HomePod smart speaker now available, it’s time to think about how a HomePod would work for you. We took a HomePod home as soon as they became available, so now we can share our experiences.

Available in black or white, the 6.8-inch high device is meant to be placed on a kitchen counter, tabletop, or desk. Although you mostly interact with the HomePod by voice, it can be more convenient to tap its top-mounted buttons, so putting it on a refrigerator might not work well. We experimented with a few locations before deciding on the dining room table—it’s where we eat and is close enough to the kitchen that we can listen to the HomePod while cooking.

You may have heard that the HomePod can leave rings on oil-finished wood furniture because the silicone base can react with certain wooden surfaces. It’s true, but the solution is simple—put something under it. A coaster or piece of paper will do the job.

We agree with the many positive reviews of the HomePod’s audio quality—it really knows how to rock out! In fact, in our contemporary home with a lot of oddly shaped open space, the HomePod delivers better sound to more locations than our traditional stereo system. There’s no lack of volume, either. At 6 feet, we measured the HomePod’s sound output at 100% volume at 80 decibels, which is louder than is comfortable. You control the volume by percent, as in “Hey Siri, set the volume to 15 percent.” You can also tap the + and – buttons on the top of the HomePod to adjust the volume in 5% increments. The HomePod can hear you even when playing loudly, so you don’t have to shout.

As it turns out, the HomePod makes an excellent speakerphone. It’s enough better than the iPhone’s built-in speakerphone that we are now enjoying frequent calls with far-flung relatives while we eat dinner. A relative who relies on an iPhone-connected hearing aid also now has a HomePod and likes it for speakerphone conversations because they don’t involve his hearing aid. You can’t initiate a call on the HomePod, but once you start one on your iPhone, you can transfer it by tapping the Audio button and selecting the HomePod. 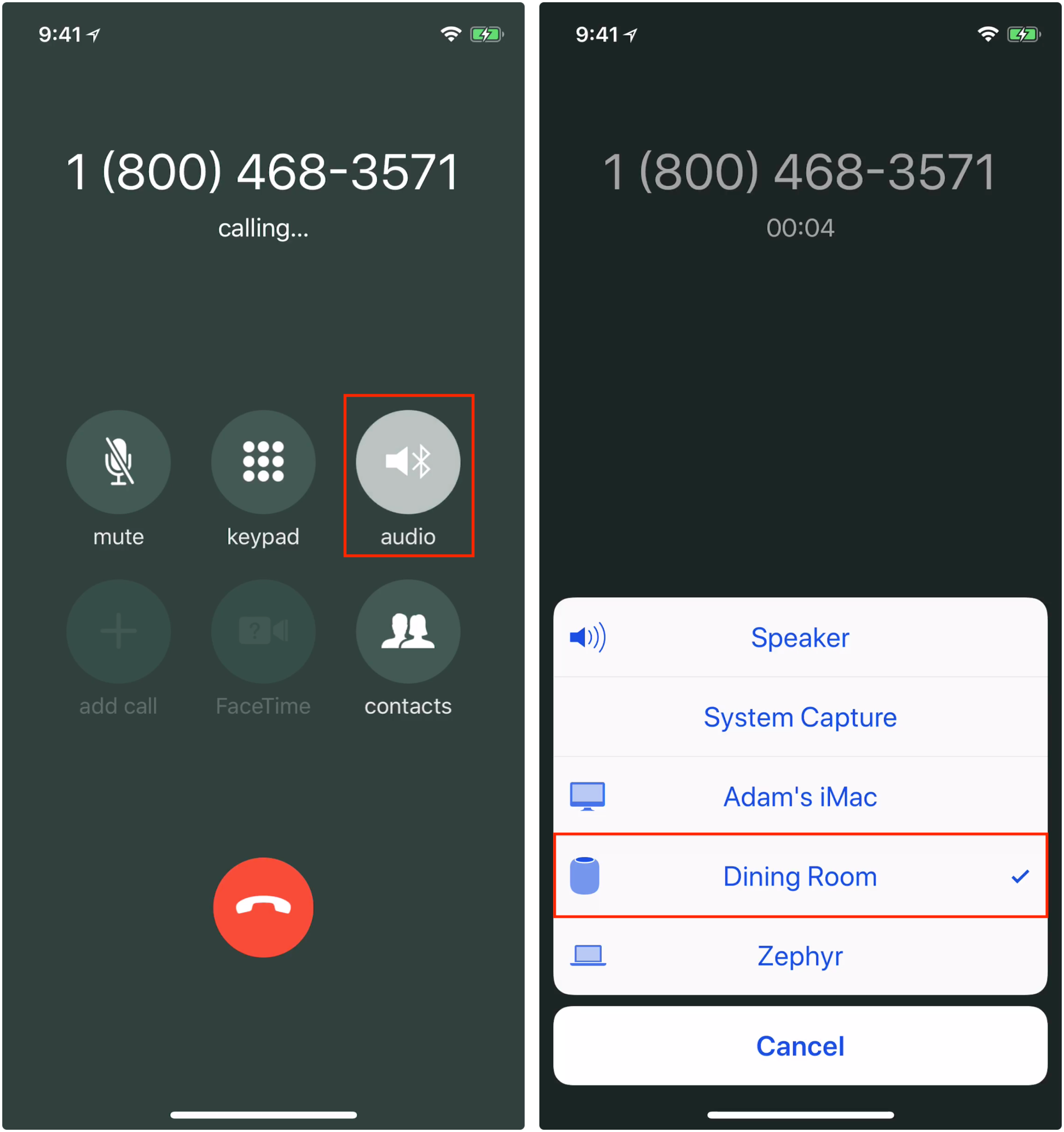 The HomePod is configured for a single user from that person’s iPhone. It then ties into that person’s account for Apple Music, iMessage, iCloud, and the iTunes Store. So, when we listen to Apple Music on our HomePod, everyone is using a single Apple Music account. Luckily, we like the same types of music, because Apple Music adjusts its understanding of what its account holder likes based on what’s played. If your family members have radically different tastes, you’d have to insist that they play music from their iOS device or Mac and then use AirPlay to send the tunes to the HomePod. We’ve been enjoying various decade-based playlists on the HomePod, plus radio stations based on certain artists. So, we will often say “Hey Siri, play 80s workout tunes,” or “Hey Siri, play Mark Knopfler radio,” or “Hey Siri, play music I’ll like.”

We’ve also been listening to podcasts and news. The primary HomePod user can start listening to a podcast on the HomePod and then pick up where they left off on their iPhone, for instance. The news feature lets you set a default news source (Bloomberg, CNBC, CNN, ESPN, Fox News, National Public Radio, NBC, or the Washington Post). So you can say “Hey Siri, switch to NPR,” and then say “Hey Siri, give me the news.”

We had worried that the HomePod would be a power hog, but that concern turned out to be unfounded. The HomePod doesn’t have an on/off switch and is meant to be always on. But in our testing, it used just 2.5–3 watts when it was idle but had been used recently, and 4–7 watts when playing. Left alone in a quiet room for a while, and its power usage dropped to 0 watts with an occasional 1.5-watt spike.

Although you can ask the HomePod the same sorts of trivia questions that you can ask Siri on most Apple devices— questions like “What is the population of Brazil?”—we haven’t been asking more of these questions with a HomePod in our house. Nor have we been using the HomePod often for Siri requests that can be made just as effectively on our iPhones or Apple Watches, requests like setting reminders or sending text messages, perhaps because we were already in the habit of using other devices for those commands. But, the HomePod works fine for many of these commands (though oddly not for calendar interactions) if you are the HomePod’s primary user. (If you worry about your 10-year-old pranking your reminders list, you can turn off the Personal Requests feature.)

It’s not surprising that we’ve taken to the HomePod’s audio playback features since Apple considers first-class audio a key HomePod feature. It has enhanced our dining room and the time we spend there, plus made it easy to enjoy a podcast or switch on dance music while mixing a meatloaf.

Because the HomePod has so many features, it’s worth trying one in person to get a feel for what it would be like to have one in your life. We have them in our stores and encourage you to stop in and try your favorite “Hey Siri” commands.

Your Apple Premier Partner has got you covered!

Have questions about the HomePod? Ask us! At Simply Mac, we are all Apple, all the time. Our passion is to bring the Apple experience right to your neighborhood. As an Apple Premier Partner, we can offer you the same products, same prices, same warranties, and same expertise. We house a professionally trained staff who can give our customers expert advice and personalized service. With 45 locations nationwide, each with their own Apple Certified Specialists, we’re only a click or call away. Schedule an appointment at your local Simply Mac today!