Three Great Ways to Have Fun with the iPhone Camera

You probably know how to snap a standard photo with the iPhone’s camera. But you may not have known that you can capture fleeting moments—and have more fun!—by using three special options in the Camera app: burst mode, Live Photos, and Slo-Mo videos. These options are especially great for things that move—kids, pets, water; you name it. They don’t require any particular skill and are guaranteed to make your memories more vivid.

With a burst, the iPhone takes ten photos per second, enabling you to capture exactly the right moment of the action or the best facial expression.

To invoke a burst, merely hold the shutter button down for a few seconds while you take your photo, instead of letting go immediately. You’ll a hear a clicking noise as your iPhone takes a series of photos rapidly. Now that you’ve taken a pile of photos, though, how do you sort out what you want to keep?

You can easily discard unwanted frames in the Photos app, in either iOS or macOS. Bursts appear as “stacks” in two places: the main Photos screen and the automatically created Bursts album. Tap a stack, tap Select (on the Mac, double-click the stack and then click the Make a Selection button), and swipe horizontally to view all the photos. To keep a photo, tap it so it gets a blue check mark at the bottom. When you’re finished, tap Done to remove the unwanted images. 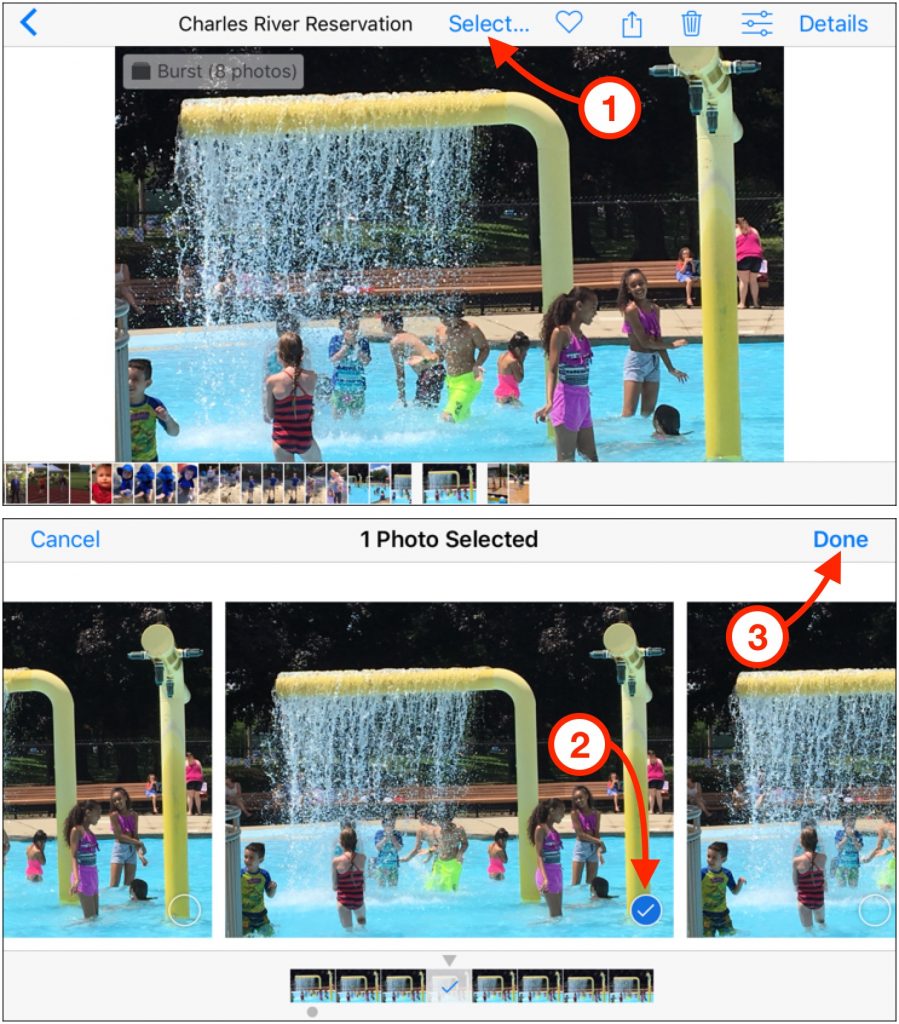 If you use iCloud Photo Library or My Photo Stream to sync photos, it might take a while for the entire burst to move to the Mac. Photos on the Mac puts a circular progress indicator in the lower-right corner to indicate that photos are loading.

Also, if you’re using My Photo Stream, only bursts you’ve marked as favorites (by tapping the heart icon) will transfer to your Mac by default. To change that behavior so all bursts transfer, open Settings > Photos & Camera and turn on Upload Burst Photos.

A Live Photo looks like an ordinary photo in most circumstances, but embedded within it is a video, complete with sound and a 3-second animation—1.5 seconds before you took the photo and 1.5 seconds after. Because they capture movement and emotion, Live Photos really pop when you view them. You can also use a Live Photo as an iOS device’s Lock screen wallpaper or as an animated image on an Apple Watch face.

Taking a Live Photo is simplicity itself. Make sure the Camera app is in Photo mode, tap the bullseye icon to turn on Live Photos (when it’s yellow, it’s on), and tap the shutter button, trying to keep the iPhone steady both before and after the tap. (If you don’t see the Live Photos bullseye icon, sadly, your device is too old to take Live Photos.) 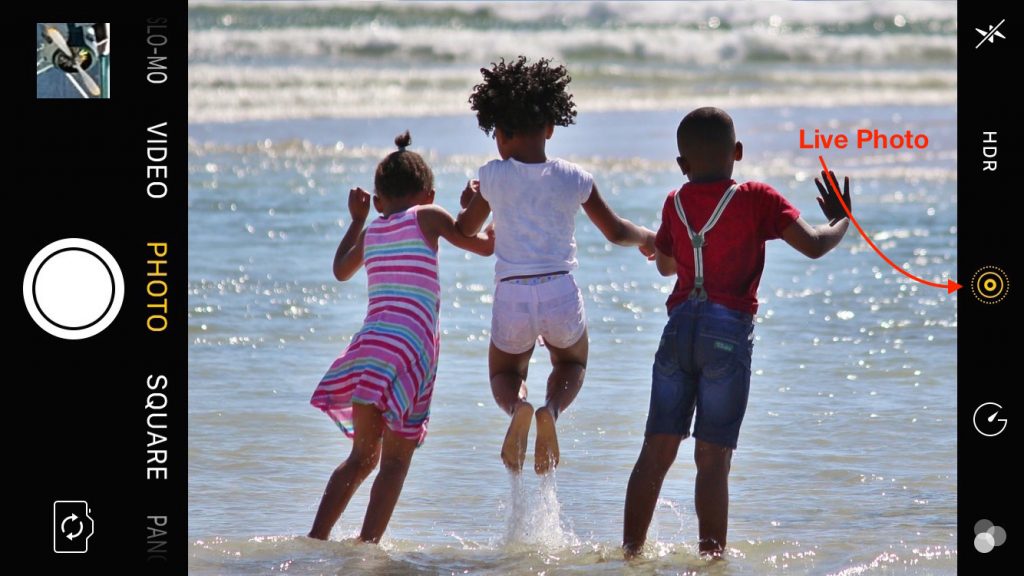 Your image appears in the Photos app, both in the main Photos screen and in an automatically created Live Photos album. To “play” a Live Photo in iOS, press and hold on it—keep holding during playback. On the Mac, hover the pointer over the LIVE badge in the corner. 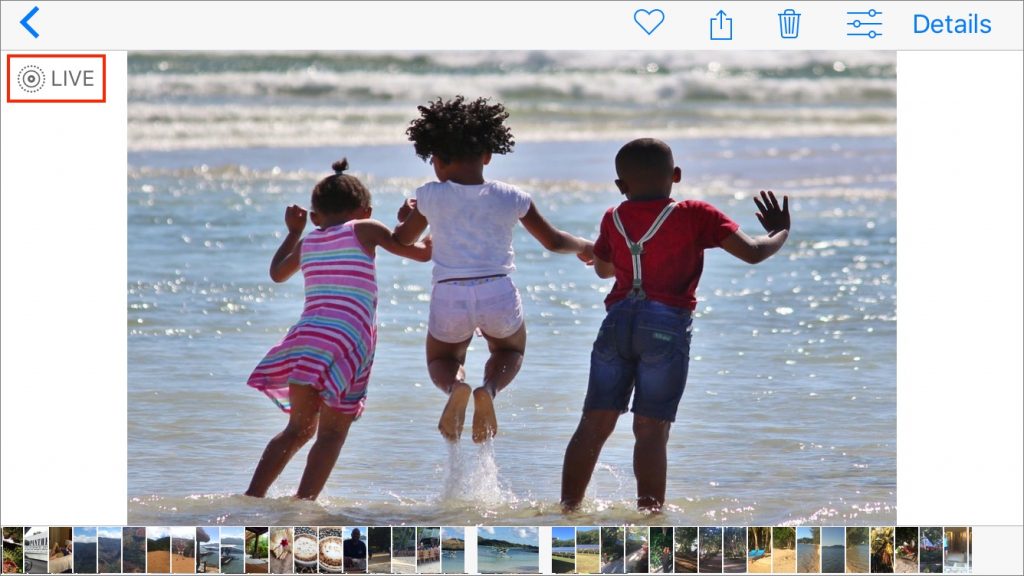 When iOS 11 ships in the fall, look for new Live Photo editing features, like making a Live Photo loop repeatedly and creating a blurring effect by converting it to a single image with a long exposure.

With Live Photos, you still have to guess at the exact instant to tap the shutter button. To ensure you don’t miss the best moment, try slow motion video. We especially like using Slo-Mo for water, because it brings out the detail in ripples and bubbles. Try it for raindrops landing, kids jumping in pools, and teens skipping stones across a pond—it’s a great way to determine who got the most skips!

Slo-Mo is a mode in the Camera app, so switch to Slo-Mo before you record. As with normal video, tap the shutter button once to begin recording, and tap it again to end. Try to hold still while you record! What’s that white circle that appears while you record? It’s a secondary shutter button—tap it to take a still photo while recording. 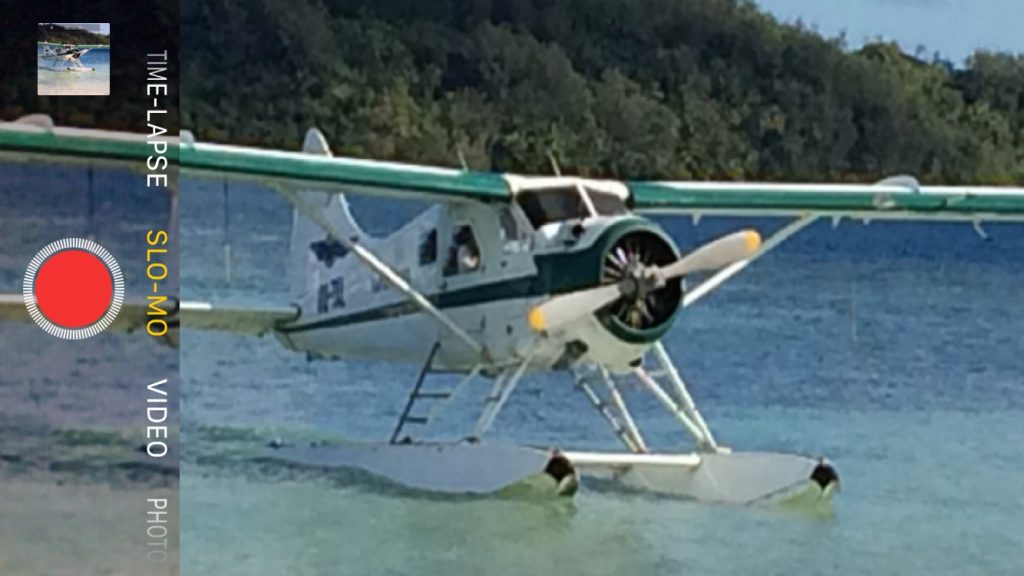 Your movie appears in the Photos app, both in the main Photos screen and in an automatically generated Slo-Mo album.

Your Apple Premier Partner has got you covered!

At Simply Mac, we are all Apple, all the time. Our passion is to bring the Apple experience right to your neighborhood. As an Apple Premier Partner, we can offer you the same products, same prices, same warranties, and same expertise. We house a professionally trained staff who can give our customers expert advice and personalized service. With 45 locations nationwide, each with their own Apple Certified Specialists, we’re only a click or call away. Schedule an appointment at your local Simply Mac today!